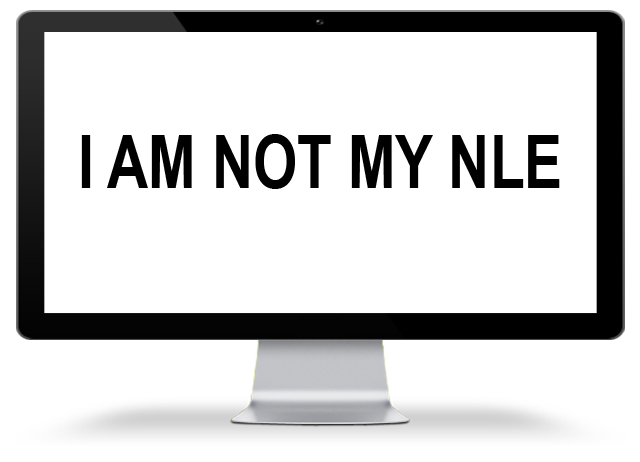 Iâ€™m going to start this article the way I respond to people when they ask what NLE I use.

â€śIt is irrelevant what NLE you use. The general public will not go to a movie or watch a TV show and say, Wow, that was cut on [Insert NLE Here]. They will say, that movie was good or that movie was bad.â€ť

Sure, editors might have their preference of NLE, but I cannot tell you how frustrating it is to hear people drone on about the same arguments, over and over, why [Insert NLE Here] isnâ€™t as good as [Insert Other NLE Here]. We could be talking about the craft, we could be talking about story, structure, pacing, techniques, but no, we always fall into NLE tech talk. This is partially because of the In-Group/Out-Group dynamics that Gordon Burkell mentioned in his article, The Psychology of the Cutting Room. Youâ€™re either in a particular NLE group or you arenâ€™t, and you feel a connection to those who are aligned with you.

So why am I writing this? Itâ€™s simple, Iâ€™m writing this because I started to see some change, a glimmer of hope perhaps. That was until Focus used FCPX to edit.

(Full Disclosure: I use Avid, FCP up to 7, Premiere Pro, and even at one time Media 100. I have the latest version of FCPX, but I havenâ€™t had a job that required it)

You see, when FCPX came out, there was a backlash. People stopped using it, not because they â€śhatedâ€ť it or anything, but because certain tools that were needed for many workflows were missing. A simple example being, multi-cam. Many, if not all, these issues are gone or have had plugins made, and Apple has worked hard to improve it and now itâ€™s been used on Focus. Which, despite this article, I am happy to see!

When Apple and Avid were battling it out, it became absurd. People would argue over the most trivial matters about the NLE they were using. People would argue over what was â€śIndustry Standardâ€ť and in some crazy cases argue over â€śWhat does Pro even meanâ€ť. Iâ€™d get calls for work looking for an â€śFCP Editorâ€ť or â€śAvid Editorâ€ť which was ridiculous. Unless I am being brought into a broadcast situation, where the NLEs have been chosen, or Iâ€™m joining a project that has already been started by another editor, why is the producer or director choosing my NLE? I donâ€™t care what saw my contractor is using, I care that the work heâ€™s done is good.

But in the brief moment, after FCPXâ€™s launch and before Focus, something interesting happened. People still talked about NLEs and what they used, but it wasnâ€™t as vitriol. I would be in groups, and the discussion would move to NLEs and people still disagreed, but there seemed to be more acceptance about using what you felt comfortable using.

I remember odd situations happening, that seemed like I was in a parallel universe. I had lunch one day with an editor, who was a part of various Avid events and I mentioned that I was using Premiere for a project because the project was started and the editor was fired. He asked how I liked it, and I said I was really enjoying it. His reaction shocked me - he divulged he had been using Premiere on smaller projects and after switching the key commands to Avid, loved it. It was odd, it was like he was in confession. He started asking me questions and talking about particular tools and how he had used them and how glad he was to see someone else was using it that had been using Avid for so many years. I had to remind myself that this guy was a staunch Avid supporter, one I had seen verbally fight it out with FCP users.

Another editor, who cut animation, was forced by the post house they were at to move to FCPX and although they fought it tooth and nail, after about a month of using it they divulged to me - another confessional - that they loved it, the tapeless workflow was amazing and some of the little things Apple had added made their work far more efficient. They now championed FCPX and encouraged other Animation editors to use it.

This is why I am frustrated; it seemed like as a community we were moving away from the idiocy of looking down on someone based on their NLE of choice rather than their ability to cut. It seemed like people were moving away from that as a discussion point. Despite the NLE companies, in some cases, stoking the flames. However, with the release of Focus, Iâ€™ve already started to see blogs and articles taking aim at users of other NLEs. We canâ€™t let this brief moment of normalcy end. Donâ€™t allow yourself to be baited. If someone is gearing up for an NLE fight let them know:

Iâ€™m a storyteller, I am not my NLE. #iamnotmynle