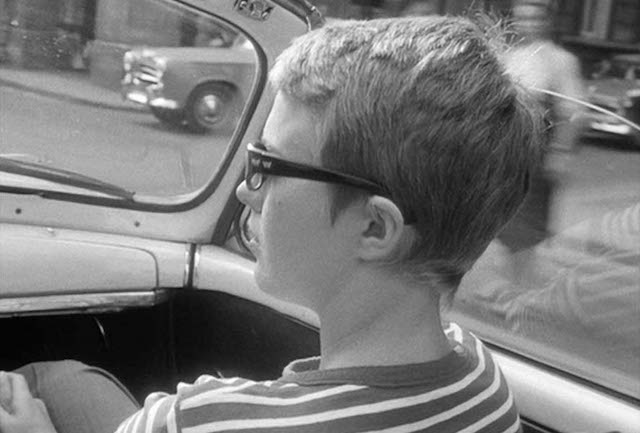 A Break in the Action: The art of the jump cut


Some of the great inventions, from penicillin to the microwave, were discovered by accident – moments in history when trial and error led to scientific breakthrough. In the history of cinema, the “jump cut”, a stylistic device that is used ad nauseam today, falls into this category.


The jump cut was first utilized in the 1896 short film The Vanishing Lady (edited by Georges Méliès) on pure happenstance. Méliès’s camera jammed and upon reloading it he discovered that the buildings had not changed but the people around it jumped. It became a special effect, one of many of Méliès’s, in a disappearing magic trick. Its purpose was practical, not thematic: it constructed one of Méliès’s illusions, instead of conveying an abstract idea or emotion. This trick is executed in today’s visual media. Check out this recent State Farm commercial, which adapts Méliès’s handiwork, albeit more elegantly thanks to the technology of modern editing.

1) It fragments a particular action,

2) It creates an ellipsis in time, and

The filmmaking term “Thirty-Degree Rule” is a rule of thumb for determining if a violation of space has occurred. If the camera’s position is altered at less than thirty degrees, the transition will draw attention to itself as a jump within a given spatial field. As a result, there is an abrupt effect, which means this violation has occurred. However, anything outside that range will generally register as an invisible cut.

In 1960, the jump cut gained notoriety in Jean-Luc Godard’s Breathless (ed. Cécile Decugis). While there are a few stories behind the reason for its use (some scholars suggest Godard added these cuts to rebuke a domineering producer), what’s more important was the response. Filmmaker Jean-Pierre Melville observed that Godard cut “within scenes” (Gurny), which magically had its own effect – creating an “illusion of immediacy.” (Brody 69)


What’s undeniable is this new use of jump cuts demanded serious consideration from the viewer. The silky smooth quality of classical ending met its counterpart; a type of editing that emphasized impressionism over realism, that is to say it forced the viewer to feel the break in action and see the cut for what it truly was – a severing of time and space. As Mark Cousins writes in his vital book, The Story of Film: “the cuts were beautiful in themselves, because they emphasized that what we were watching was cinema, just as painters had turned to cubism many years earlier because it emphasized the flatness of the canvas.” (270-271)

Since Breathless, the jump cut has become an indispensable device for directors and editors. One of the notable benefits is its ability to accelerate narrative by breaking up shots so that only the necessary actions are left over on screen. With each cut, our field of vision refreshes; we feel like there is something new to look at even though the viewer is effectively evaluating the same shot (only at a subtle shift on the axis). Once again, following Walter Murch’s “In the Blink of An Eye”, this displacement “produces a mental jarring– a jump– that is comparatively disturbing.” (Murch 7)


Today, this “jarring” quality is customarily exploited in Youtube videos or music videos to busy the viewer’s attention span. Since online media is constantly in contest with peripheral distractions (side bars, widgets, pop-ups, etc.), the jump cut has become the dangling carrot of stylistic devices. It entices the online viewer’s attention for the sole purpose of quick-and-easy consumption. This is not necessarily a failed use of the jump cut – it’s a means of adding punch to your video, which is not far from Godard’s initial intent. The issue is the shot, in this sense, does not encourage the viewer’s reflection of cinema. This is a regression back to Méliès’s century-old magic trick – only this time the illusion is to trick us out of boredom. A Youtube show like “Equals 3”, which satirically comments on viral videos, follows this method to a tee. Host Ray William Johnson strategically positions himself around the room, so at each cut the camera has not moved but our eyes must track the host in a different quadrant of the image. This tactic has been adapted wholesale by Youtube personalities, Johnson being one of the pioneers.


On the other hand, some documentarians use similar types of jump cuts in their interviews, but the motivation is far more complex. Where many Youtubers employ these cuts to eliminate the uh’s and um’s of human speech or any sense of contemplation (unless it’s for comedic effect), documentarian Errol Morris uses them to show how his subjects organize their thoughts, qualify their arguments, or contradict their premises. His documentary, Fog of War (eds. Doug Abel, Chyld King, Karen Schmeer), is a prime example; it focuses on former Secretary of Defence Robert McNamara and his views of modern warfare. Conducting interviews with McNamara in closeup, Morris places jump cuts sometimes mid-sentence. Morris explains that these cuts demonstrate his subject’s “infinite regress”, how the man effortlessly zigzags from thesis to thesis. The cuts tap into McNamara’s thought process, making them less about what he says and more about how he says it.

Lastly, most filmmakers implement jump cuts at isolated moments in their films. Others, like Terrence Malick, rely on them for an entire duration. In The Tree of Life (eds. Hank Corwin, Jay Rabinowitz, Daniel Rezende, Billy Weber, Mark Yoshikawa), Malick jump cuts during conversations and scenes in motion, to eliminate the temporal and evoke the fragmentation of memory. Since the film partly surrounds a man’s reflection of his childhood, Malick breaks up the frames to show that memory is not continuous, discontinuous - it omits certain details that may have been lost to the passage of time.

In The Tree of Life, jump cuts work because its story informs the stylistic device itself. As the handy article “On the Proper and Improper Use of Jump Cuts” states, the jump cut must achieve a reality or impression of your character(s). Without either, the jump cut registers as false since it only exists for its own sake – to force an emotional response. For editors, this is a good rule to follow if you want to splice jump cuts into your work: ensure that the cuts create themselves in a sense as if the scene could not reach its full effect without them. Read more on this topic in our article on “Motivation”.

Murch, Walter. "The Rule of Six." In In the Blink of an Eye: A Perspective on Film Editing. 2nd ed. Los Angeles: Silman-James Press, 2001.