If you haven't read part two: Read it here

Probably the most frequent question I get from editors is about a target level for their audio mix. I hear numbers such as 0 dB, -6, -18, etc., which typically refer to dBFS (decibels relative to full scale) as reflected on the built-in Peak Program Meters (PPM) in their NLE. These meters tell you how much headroom you have, which is how close your highest peaks are to digital distortion. This peak value has very little to do with the average level, or the perceived loudness, and as such, is not too useful in finding that "target" mix level.

In December, 2010, Congress enacted legislation which required the FCC to standardize audio loudness for digital television (Commercial Advertising Loudness Mitigation Act, or CALM Act). Not only does this give us new meters, but also a new approach to mixing, which will ensure that commercials are no longer drastically louder than the surrounding program. To understand where we are, we must spend a little time considering where we‚Äôve been.

Before digital audio was the norm, the target was easy to see.

When I started mixing for television, one common delivery method was Beta SP. The machine had VU meters on the front, and the broadcast specs were something like, "Can't stay above 0 VU longer than X" or "Cannot hit +3 VU more than X times". In general, the meters needed some movement, and it couldn't be too hot or extremely low. Typically long-form programs used the whole meter (more dynamic range) while promos and commercials would try to stay close to zero for the entire spot, which is why commercials have traditionally been louder.

The VU meters have fairly slow ballistics (speed of movement) and represent an average level, with the intention of showing perceived loudness. They typically also will have some sort of LED which will light up when the peaks are too high.

A meter like the Dorrough Loudness Monitor more closely reflects perceived loudness through a mathematical function of time and amplitude and graphically displays audio power.

Both average and peak readings, based on real-time waveform analysis are reflected on the meter. The distance between the two is called the crest factor and helps the experienced mix engineer make dynamics processing decisions. Personally, I use a Dorrough plugin on my output master and keep it on screen throughout the entire Audio Post Production process, regardless of what other metering I may be doing.

While watching the Peak Program Meters in your NLE, you can try to get a sense of average level, but it's very difficult. Since there is no crest factor, any guess of average level is just that - a guess. As you can see in the video below, the PPM only displays peaks, while the Dorrough meter shows peaks and average levels. The Loudness Radar and Waves Loudness Meter display your current (short term) loudness level as well as a running loudness level for the duration of your program.

So where does that leave us now? In digital recording, there is no longer an optimal level due to hardware or media limitations. The sound quality is the same throughout the entire dynamic range. The zero has moved, and instead of it being optimal, it is now the uppermost limit. Pushing your audio signal above 0 dBFS (decibels relative to Full Scale) results in hard clipping and harsh distortion of your audio.

The transition to digital established a bridge between the analog world and the digital, typically "0 VU = -20 dBFS", which gives you 20 dB of headroom between the old zero (optimal) and the new zero (max). When DigiBeta moved in as the new standard medium, the meters changed to PPM, with zero at the top, and the standards changed to something like, "Digital peaks not to exceed -10 dBFS". By not defining anything resembling perceived loudness, the volume war was on, and commercials continued to be mixed louder than regular programming. Through the use of powerful compressors and limiters, the crest factors shrunk and the average levels approached the peak levels.

Without a good loudness standard, the broadcast industry became like the Wild West of audio levels. Then the Commercial Advertising Loudness Mitigation Act (CALM Act) came in like a new sheriff. It's by far the most complex of all of the standards to date, but it does take the guess work out of trying to hit final output levels for broadcast. As a general rule, if you are producing content for broadcast and you don't have specs from the network, use -24 LKFS (+/- 2) and -6 dBTP (True Peak) on a newer Loudness meter. Adobe Premiere comes standard with an audio plugin called, "Loudness Radar" which tracks your LKFS level over time, to give you a reading for the length of your program, and also gives you a visual indication of instantaneous level. If you just want numbers for short term and long term LKFS, the Waves Loudness Meter is a good choice. If you‚Äôre looking for more detailed tracking and reporting, and possibly even correction of your mix files, there are some great options from NuGen Audio and iZotope. 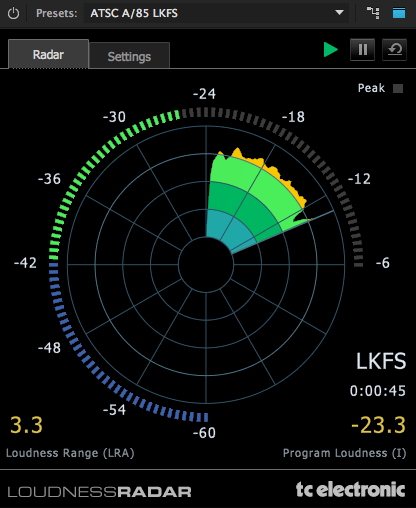 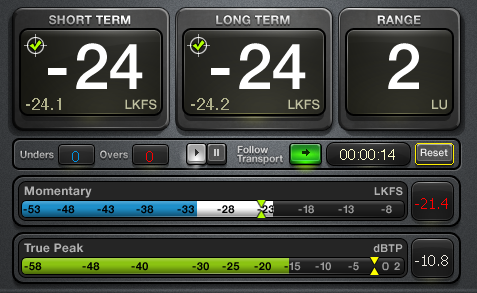 For non¬≠broadcast video productions there may still be a little more flexibility, and you may choose to mix a little bit louder. Web videos, for example, I tend to mix closer to -20 LKFS, and have even recommended -18.

So, what do you do? Well, if you have a VU meter - try to keep your mix in the acceptable range, where 0 VU is your target and you'd rather spend more time below than above. If you have a Dorrough meter - you can use the average level reading like a VU meter, while the peak reading can give you additional information about your mix. If you have a new loudness meter with LKFS - you should be able to check (and sometimes even correct) the levels of your entire program, and keep them within the spec you‚Äôre given. Most importantly, when you begin to get your meters to read what they should, use your ears. And be sure to monitor at a good level in a decent listening environment.

In part 2, I will show you what to look for in the various meters and will demonstrate how to get your mix to land in the right zone.

If you haven't read part two: Read it here