Manhattan Edit Workshop (MEWShop), the cutting-edge authorized digital training destination for post-production and content creators, has announced exciting new updates to its annual Sight, Sound & Story event, which returns to Manhattan on June 14, 2014. Headlining the one-day event is Academy AwardÂ®-winning editor Michael Kahn, A.C.E., who will join author and film historian Bobbie Oâ€™Steen for the premier panel, â€œInside the Cutting Room with Bobbie Oâ€™Steen.â€ Sponsored by HP and IntelÂ®, this in-depth session will explore Michaelâ€™s legendary and eclectic career â€“ from his early work in television through his 34-year collaboration with director Steven Spielberg.

In addition to Michael Kahn, Sight, Sound & Story will bring together a number of high-profile speakers to take audiences behind the scenes of some of todayâ€™s hottest productions. Panels will cover documentary editing, the cinematic revolution of episodic television, sports docudrama and sound design. For more information on this yearâ€™s Sight, Sound & Story event, please visit http://www.sightsoundandstory.com/.

Sight, Sound & Story: The 2014 Lineup of Panels and SpeakersPanels at this yearâ€™s event will include: â€œAnatomy of a Scene: Documentary Editors Deconstruct Their Work,â€ â€œTV is the New Black: Televisionâ€™s Cinematic Revolution,â€ â€œFast and Furious: Cutting Sports Television,â€ â€œâ€˜The Wolf of Wall Streetâ€™ Soundscape from Production Audio to Final Mixâ€ and â€œInside the Cutting Room with Bobbie Oâ€™Steen featuring Michael Kahn, A.C.E.â€ The summit will conclude with a gala reception and networking session for over 300 guests, panelists and vendors.

â€œThe MEWShop editing summit is amazing because it creates a space for professional editors to come together and talk shop â€“ something that we rarely get to do,â€ says Garret Savage, a 2014Sight, Sound & Story moderator. â€œI attended last year and found all the panels to be enlightening and inspiring. I loved the variety of topics and discussions. I knew that day that I wanted to get involved in the summit in some way, so Iâ€™m thrilled that this year we are presenting the documentary editing panel, and Iâ€™m honored to be moderating. Once a great film is done and ready for the public, it is often hard to see all the work that went into it. Our panel has a chance to go behind the final cut and get into the nuts and bolts of how the filmmakers got there.â€

This special symposium produced by Manhattan Edit Workshop features an extensive selection of OscarÂ® winners, innovators and industry thought leaders, who will lead panels outlining the art and processes of editing film and television, the unique and fast-paced world of editing sports docudramas, and the craft behind sound design. These honored panelists include:

Tickets include entrance to the Sight, Sound & Story networking party, which will feature an open bar, hors dâ€™oeuvres and sponsored giveaways.

Intel, Intel Logo, Intel Core, Intel Inside, Intel Inside Logo, Xeon, and Xeon Inside are trademarks of Intel Corporation in the U.S. and/or other countries.

About Bobbie Oâ€™SteenBobbie Oâ€™Steen is a film historian dedicated to celebrating the editor's invisible art. Educated at Stanford University, she is an EmmyÂ®-nominated film editor and the author of two renowned books about editing. Cut to the Chase is based on interviews with her late husband and colleague, legendary editor Sam Oâ€™Steen, and filled with stories from the cutting room and behind the scenes on such landmark films as â€œThe Graduateâ€ and â€œChinatown.â€ Her second book, The Invisible Cut, deconstructs classic movie scenes from such films as â€œRear Windowâ€ and â€œThe French Connectionâ€ through a cut-by-cut analysis. Oâ€™Steen frequently hosts the acclaimed â€œInside the Cutting Roomâ€ event series.

About Manhattan Edit Workshop â€“ Certified Training in New York City and Your CityHeadquartered in the Flatiron District of New York City, Manhattan Edit Workshop was founded in 2002 with the goal of providing cutting-edge instruction on AppleÂ®, AdobeÂ® and AvidÂ® platforms. Since then, MEWShop has added Digital Cinema Production classes, DaVinci Resolve, AutodeskÂ® SmokeÂ®, Assimilate Scratch training and a two-week documentary film production course to its already impressive curriculum. MEWShopâ€™s signature Six-Week Intensive is a jump-start for anyone looking for a career in post-production, while weekend and one-week courses introduce and solidify core editing concepts. Corporate and group training offer a customized curriculum, either in-house or on-site, for professionals eager to learn a new skill or to build on existing ones. The facilityâ€™s focus on small workshops, highly skilled and certified faculty, and a results-oriented curriculum has quickly won it the reputation as New Yorkâ€™s premier post-production teaching facility. 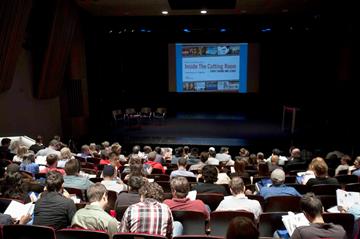